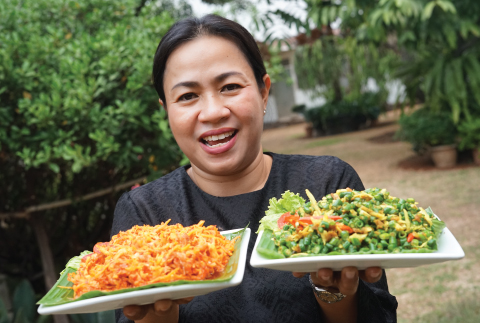 Thousands of women in Jakarta have registered home businesses since the authorities made it possible for them to do so.

Ida Ayu, a 41-year-old woman from the Indonesian island of Bali, worked at a consulting firm but found it impossible to balance the long hours with being a mother. “I spent no time at all with my children,” she says.

So four years ago Ms Ayu decided to start her own business, selling fiery rice dishes from her native island at stalls in Jakarta. “The work hours are more flexible and I can find time for my family.”

In 2018 the Jakarta government allowed residents of the capital to register a business at their residential address for the first time.

As of September this year, 28,000 small business had registered. Almost 60% of those businesses were owned by women like Ms Ayu. It shows how a simple change to the rules can encourage women’s entrepreneurship.

After registration, home businesses saw their sales increase by 10% on average, according to a telephone survey of 3,463 people commissioned by Prospera.

“It also keeps women out of the informal economy where they are more vulnerable to exploitation,” she added.

Millions of Indonesian women leave the labour force each year after they have children and most do not return.

At almost 30 percentage points, the gap between the proportion of Indonesian men and women who participate in the labour force is the widest in East Asia.

The loss of so many women from the labour force is a major drain on productive potential. Prospera estimates that it costs the economy about US$15 billion a year.

Indonesia’s economy would be US$123 billion larger by 2025 if it reduced the gap between the proportion of men and women who work by one quarter. That is equivalent to the annual economic output of Central Java.

Making it simpler for women to work from home is one way of supporting them to remain economically productive after they start a family.

In the past, strict city regulations meant that it was impossible to legally run a business from a residential address in Jakarta.

Many women continued to work but were forced into the capital’s vast informal economy, where they earn less for doing the same work and have less protection from exploitation. Getting loans and other services to expand a business is also more difficult for small businesses in the shadow economy.

Ms Ayu hopes that she will now be able to recruit more staff and share the benefits of increasing household earnings and spending more time with family that she has seen since starting her business.

“I expect my business to grow even faster.”